When you open your fridge and decide to crack open a cold one, what is it you reach for? Pale Ale? Stout? Maybe you’re someone who enjoys the bitter taste of a porter. If this terminology seems foreign to you, there’s a possibility that you rely on the soothing suds of a domestic beer to ease your tension. For beer snobs and alcohol aficionados everywhere, these terms describe their favorite suds. These terms are used to describe dark and light beers. 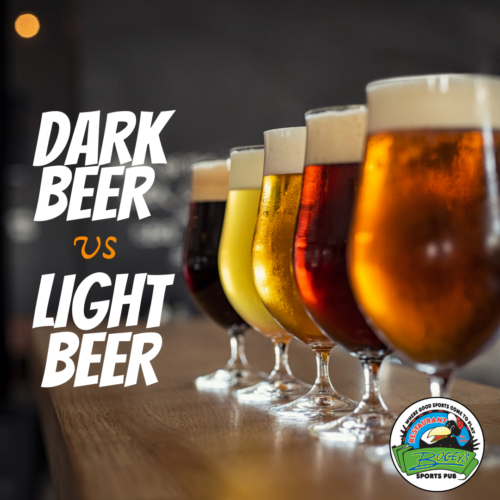 If you’re on the fence about which type you prefer, or you simply haven’t educated yourself on the differences between each one, we’re here today to offer a crash course.

A Lighter Shade of Pale

The identifying characteristic of each beer is, of course, the color. As their individual names suggest, light beer is golden or bronze in color, whereas dark beer is, well, dark. The color of a beer comes from a number of determining factors. The roasting process, ingredients, and fermentation all play an important part in giving each individual beer its own color and characteristics. Some of the types of beer that are considered “light” beers are IPA’s, pilsners, and many domestic brands. Dark beers usually come in the form of porters and stouts. Ales are either dark or light, depending upon the process they’re made.

As previously mentioned, the ingredients that brewers use determine the taste and appearance of the beers they brew. All beers, regardless of their appearance, are made with four primary ingredients; grains, yeast, hops, and water. The grains that are used in the brewing process can vary. Oats, barley, corn, rye, and wheat are the ones most commonly used.

Processing and the Final Product

Because dark beer tends to be robust, the ingredients that are used tend to be complex. Dark beers typically use more barley and incorporate flavors such as coffee, chocolate, and caramel. Light beers tend to use more hops than dark beer and are roasted for short durations at low temperatures which accounts for their lighter appearance than dark beers.

Both beers are enjoyed all year long, though dark beers tend to be popular during the colder months because of their thicker consistency. Light beers are favorable for summer and are usually seen at cookouts and barbecues.

Grab a Beer at Bogey’s

Whichever beer you fancy, there’s never a bad time to enjoy it at Bogey’s. For a menu and a list of upcoming events, pay us a visit at bogeys.tv.