From the same people who brought you “Longneck Tuesdays.” And exclusively held at the best sports bar in Venice, Florida, Bogey’s is proud to present another weekly tradition that comes right after hump day and right before Friday, “Import Draft Thursdays” is the newest weekly event that Bogey’s will be hosting to help you relieve yourself from the stresses and pressures that accompany the work week. Import Draft Thursdays not only features a wide variety of imported beers on tap and ready for consumption, but we’re also taking a dollar off the price so you can use it for something else. 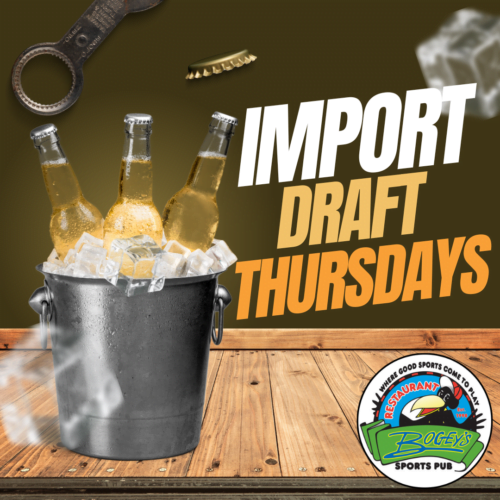 Imported beers have a few interesting facts that are attached to them. And because you can always use more ammunition for your next trivia night, we’ve gathered up a few to share with you.

Europeans Are a Thirsty Bunch

It’s no secret that Americans love beer. Just head on over to any sporting event. The taps stay busy for the duration of the game. However, most alcohol is consumed by our friends from across the pond. Europeans are pretty thirsty, and a study conducted in 2019 supports this. The Czech Republic consumes the most, followed by Moldova, Latvia, and Germany. Surprisingly enough, the United States didn’t even crack the top ten, with the African nation of Uganda consuming more alcohol per capita.

What’s the most popular imported beer? While some might think of Heineken, the answer is closer to our borders. In a study conducted in 2020, Modelo topped the charts in terms of sales. The pandemic year was quite profitable for the Mexican-based company, with over 8 billion dollars in the United States alone.

Heineken vs. Corona: The Beer Wars

Much has been documented about the bitter rivalry between Pepsi and Coke, which many refer to as the “cola wars.” If the world of alcoholic beverages has an equivalent to this contest, it would be found in Corona and Heineken. These two brands constitute the two biggest selling beers in the world, with Corona leading the game as the most popular.

The United States Imports the Most Beer

Americans enjoy their homegrown brands such as Budweiser and PBR but also have a strong affinity for products brewed overseas. The United States is the leading beer importer, with the United Kingdom and China following closely behind. We sure enjoy our libations!

Come to Bogey’s for Imported Goodness

At Bogey’s Sports Pub, you’ll find plenty of imported and domestic beers, some of the best-tasting food, and an atmosphere perfect for game night. For a menu and directions, pull up a barstool over at bogeys.tv.