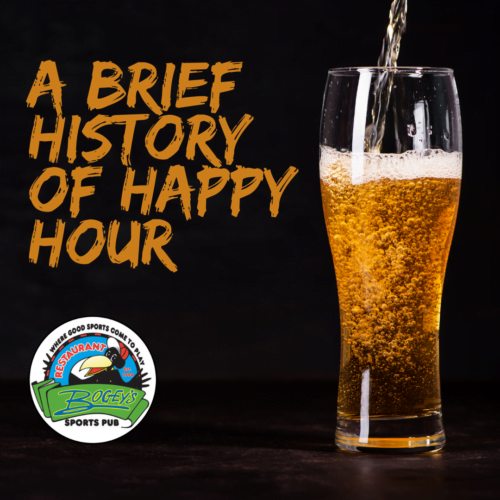 If you’ve ever stopped by Bogey’s for happy hour, you already know how much stock we put into the celebration. This is why we don’t limit the occasion to only sixty minutes. At Bogey’s, our happy hour is from 2 PM to Six PM, and unlike so many other places that limit the occasion to a weekly basis, we believe in making this a daily celebration. No matter what day, our doors are open to allow for a celebration and plenty of libations. The concept of happy hour is well-known to just about every patron, but how did it start?

The exact origin of the implementation of happy hour is a fact that’s lost to the annals of history. One of the earliest incarnations of the concept dates back to the United States Navy in the early 20th century. To help alleviate boredom when on a long voyage at sea, a weekly program was instituted on the USS Arkansas. The basis of the concept was focused more on entertainment and relaxation than alcohol consumption. This trend began to gain popularity throughout the Navy, and by the end of the first world war, several ships in the fleet had their own versions of “happy hour.” Emphasis on alcohol eventually took hold. A 1959 article in the Saturday Evening Post reported that American servicemen in the Caribbean were having an hour set aside during their day to enjoy a few libations and relax when off-duty.

From 1920 to 1933, the United States entered a unique chapter in its history—prohibition. During this thirteen-year period, the manufacturing, transportation, and sale of alcohol were prohibited. And while the nation was “dry,” it was still quite thirsty. Rum runners and bootleggers made astronomical profits from the sale of illegal booze. Ironically, the predecessor of happy hour, known as cocktail hour, began to achieve notoriety around the time prohibition went into effect. By the time prohibition had ended in 1933, bars and restaurants utilized cocktail hour as a marketing ploy to attract business following the newfound legalization of alcohol. However, happy hour is still prohibited in certain states, including Massachusetts, Rhode Island, Alaska, and North Carolina.

Enjoy Happy Hour at Bogey’s Prohibition might be a thing of the past, but you can still live out your cocktail hour at Bogey’s seven days a week for a few hours, not just one. For directions, a menu, and more, visit us at bogeys.tv.